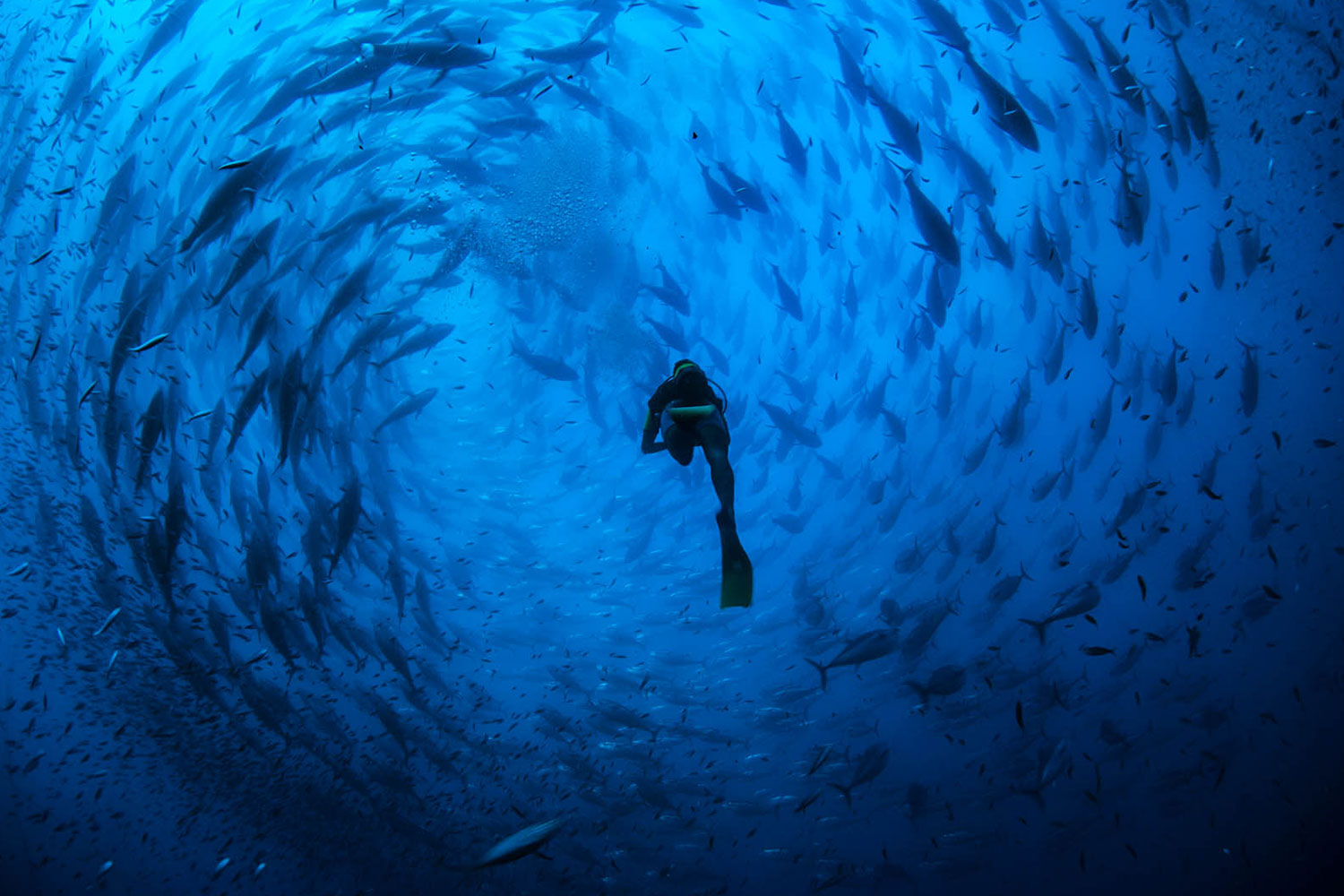 Business for Ocean Sustainability: One Ocean Foundation's multi-year research on the Blue Economy
Image by ©Kurt Arrigo
Objectives of the Report
1
2

This second edition of Business for Ocean Sustainability - A Global Perspective represents the continuation of the journey that the One Ocean Foundation set out on approximately three years ago in order to build knowledge about what companies are doing to address the many challenges facing marine ecosystems.

We have opened a new research avenue connecting the business world and the challenge of ocean protection, enlarging the “narrow” focus of the so called “blue” or “ocean” economy to incorporate all types of industries and sectors.Moreover, we have introduced a business perspective, investigating the level of awareness of companies with regard to their direct and indirect pressures on the ocean, and analyzing the responses developed to address these pressures, their diffusion and their effectiveness.

This new study draws on a large sample of 1,664 companies, accounting for 50% of the world’s market capitalization and distributed across 16 industrial sectors, both ocean and non-ocean related.The insights offer a snapshot of the main trends occurring at the global level with regard to business strategies and practices to respond to ocean sustainability challenges.

Over 3 billion people (40% of the world's population) depend on the biodiversity and services offered by marine and coastal ecosystems. The ocean supports unique habitats, and the services provided by the ocean include food and fresh water supply, renewable energy, benefits for health and well-being, cultural value, tourism, trade and transport, making a major contribution to our economic and social development. 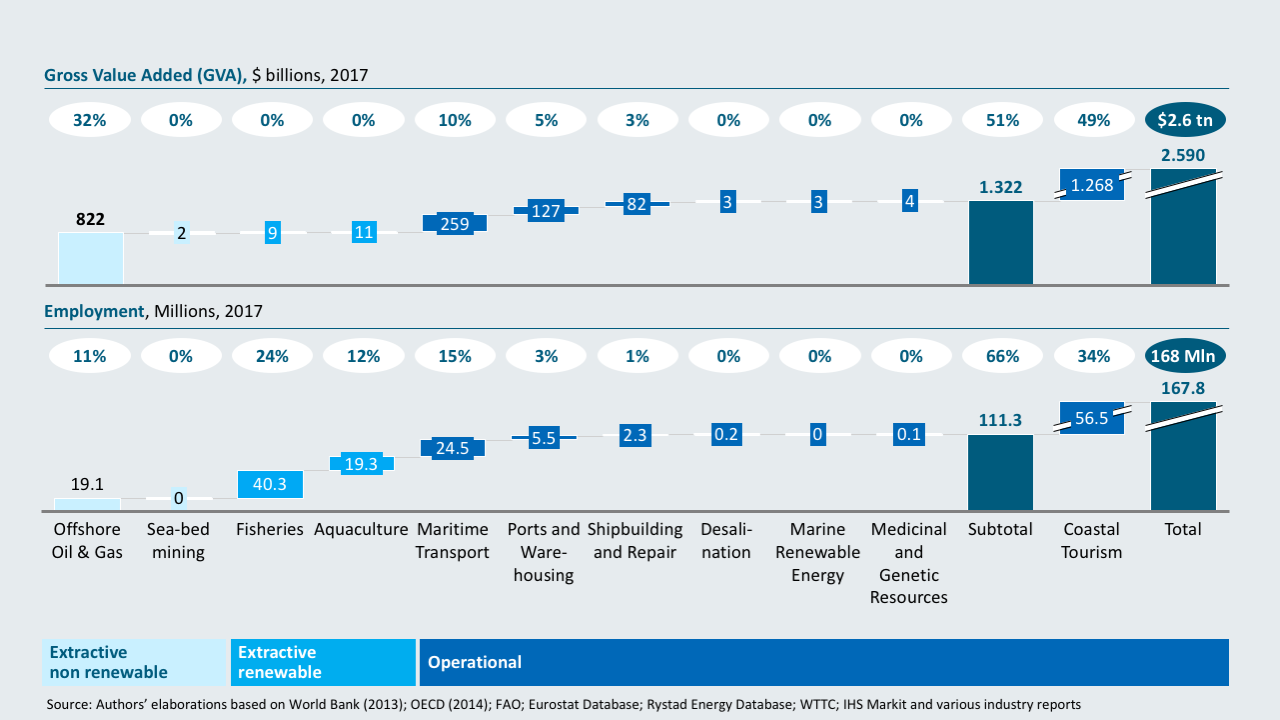 The ocean economy sectors (including established industries such as commercial fishing and fish processing, aquaculture, shipbuilding and repair, offshore oil and gas, port activities, maritime trade, and emerging sectors, such as exploitation of renewable energy) account for estimated annual revenues of $5.2 trillion, gross value added (GVA) of $2.6 trillion, 2/3 of which are generated in the Atlantic and Pacific oceans, and employ 168 million people. The ocean contributes 3.3% to the overall global economy in terms of GVA, making it the seventh largest economy in the world. Preserving the health of marine and coastal ecosystems is paramount due to the many irreplaceable benefits provided by the ocean and the seas, as well as the fact that a healthy marine environment is a “habitat” in which businesses can develop and thrive. 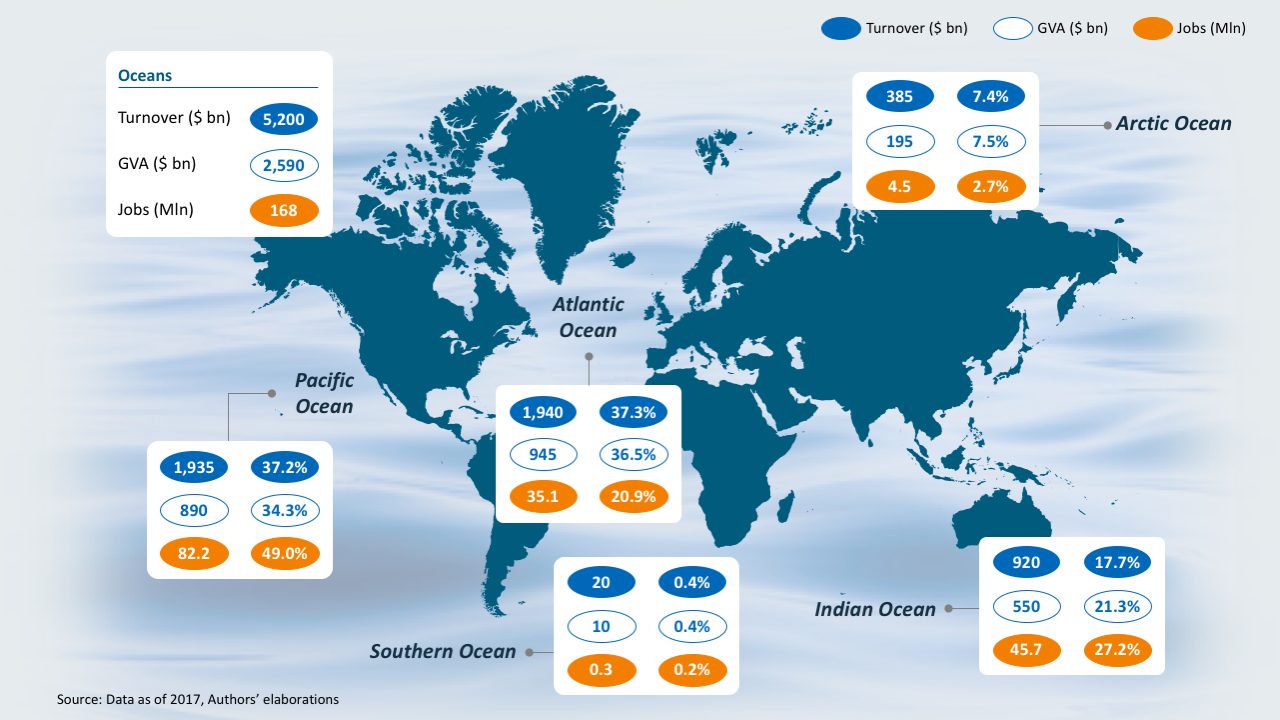 Source: Data as of 2017, Authors’ elaborations
Despite its later start, ocean-related issues have strongly increased in relevance for companies
1

Our findings suggest that 60% of all the companies analyzed have a commitment to at least one Sustainable Development Goal and, on average, they prioritize 4 of the 17 Goals in their annual sustainability reports. Of the 17 Goals, SDG 14 is included by just 7% of the companies assessed, being one of the least prioritized, but business attention has increased over the past 4 years.

According to our findings, 51% of companies are aware, albeit to varying degrees, of the potential pressures of their industries on the ocean, while 44% of them deploy some kind of mitigating activities. The best recognized problems are marine litter (mostly plastic), biodiversity and contaminants; all of them primarily associated with ocean acidification. Awareness of pressures generated by less publicized issues, such as overexploitation of marine resources, eutrophication, seafloor integrity and the introduction of energy in the marine environment (i.e. noise, heat, vibration, light) is still limited. 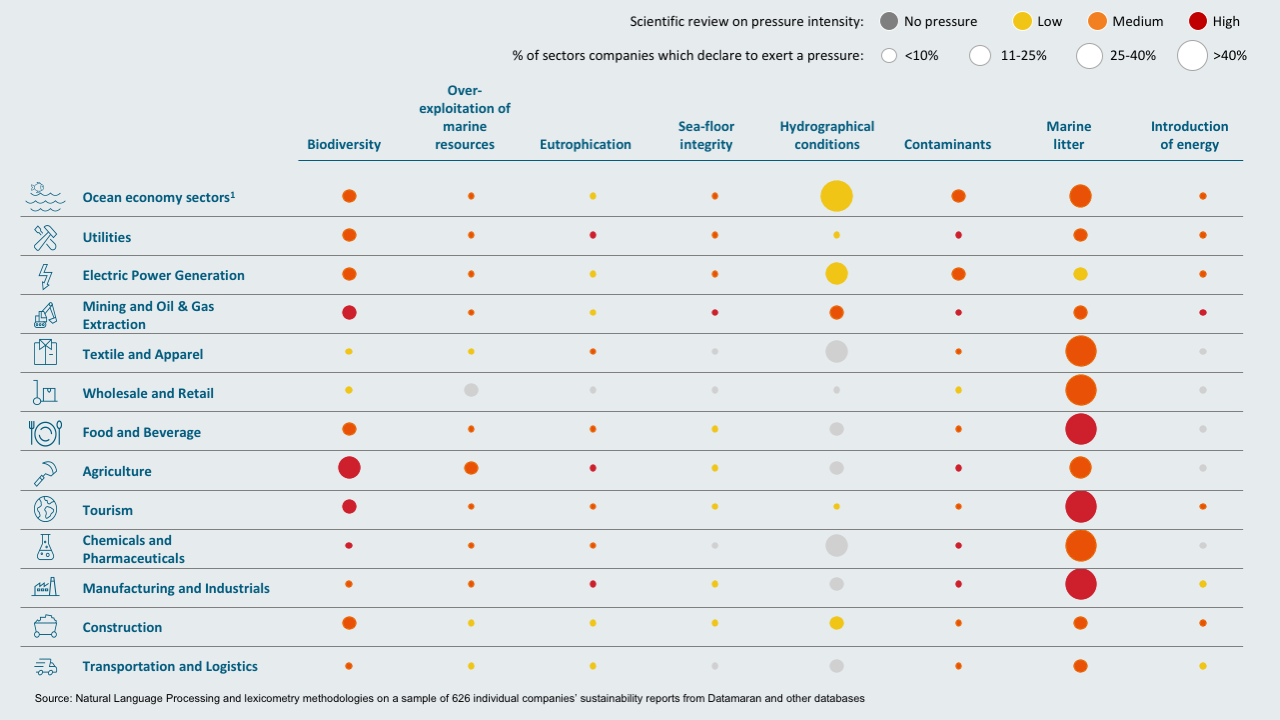 1 Include: Fisheries and aquaculture, maritime transportation, Shipbuilding and Repair, ports and Warehousing

In order to reach ocean sustainability, awareness and activation must converge. Our findings confirm that awareness of ocean-related issues is not yet widespread in all sectors and among all companies. Of our sample, 49% show low awareness, and in 1/4 of cases attention to the issues is not followed up with coherent business responses. Addressing the major sustainability challenges identified requires both “unlocking” awareness and activating companies using adequate and coherent tools.

According to our analysis, 26% of companies are simultaneously aware and active. We call these companies sustainability leaders, and they can be found in most industries, both ocean and non-ocean related. 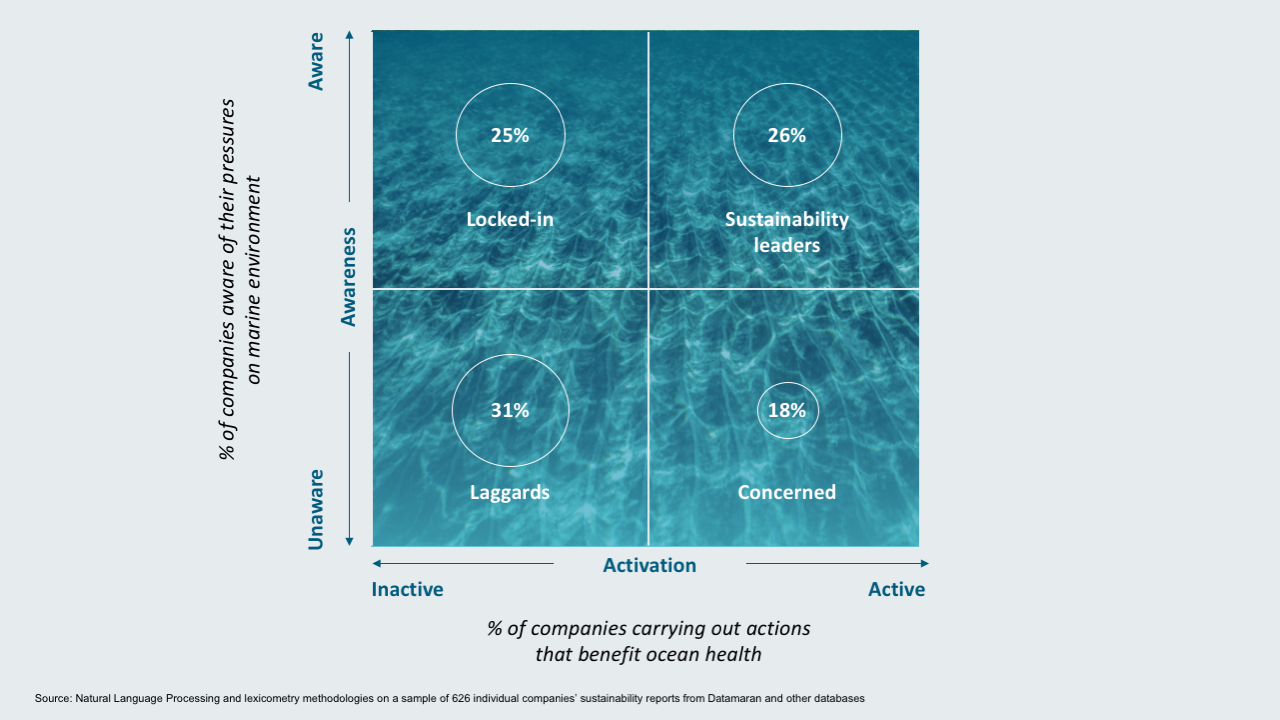 Source: Natural Language Processing and lexicometry methodologies on a sample of 626 individual companies’ sustainability reports from Datamaran and other databases
Sustainability leaders exist and they care about the ocean
1
2 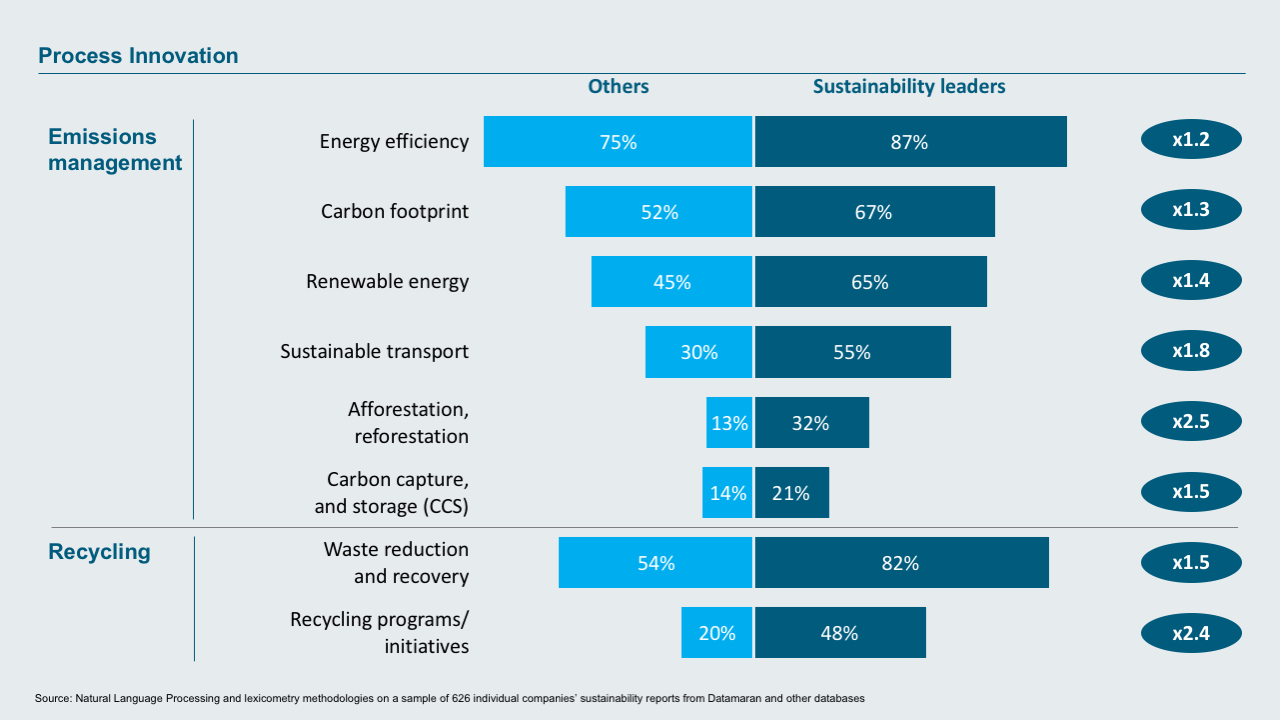 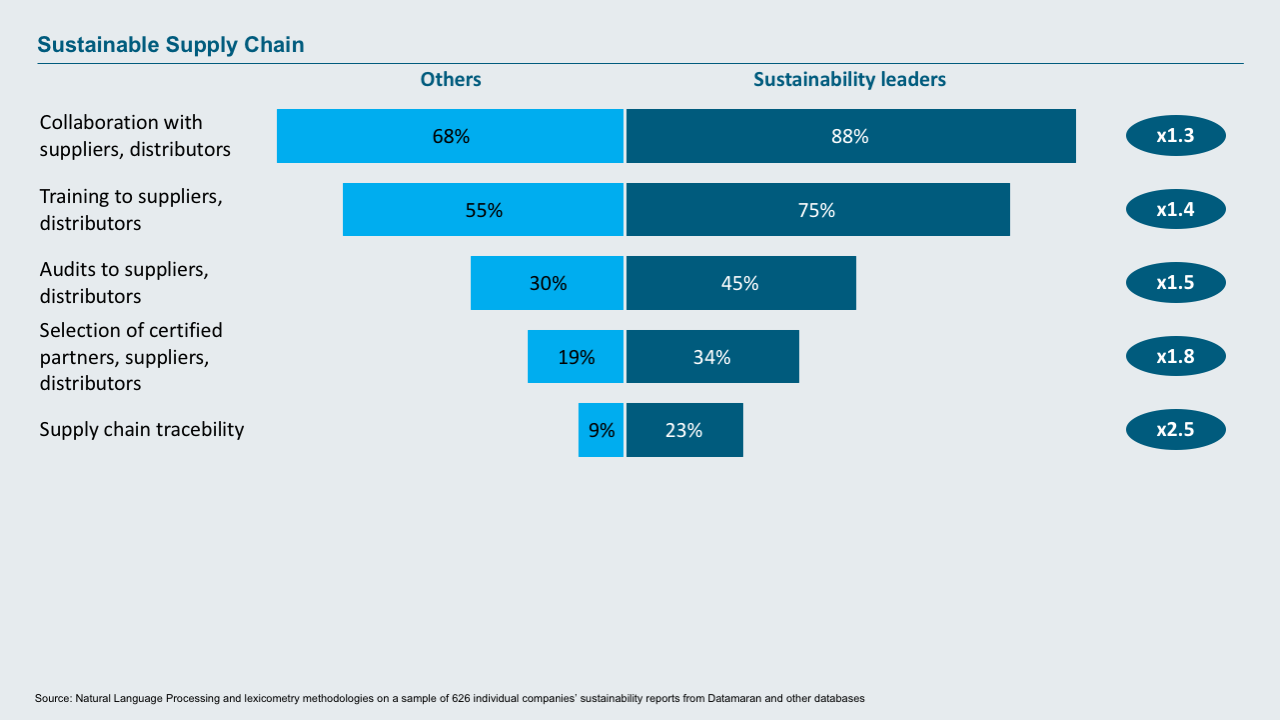 Sustainability leaders have reached greater maturity than other peers in their ESG sustainability journey, including in terms of the development of more advanced solutions for managing the supply chain, and in the adoption of transparent reporting initiatives.

Source: Natural Language Processing and lexicometry methodologies on a sample of 626 individual companies’ sustainability reports from Datamaran and other databases
Activation boost: supply chain initiatives can trigger actions towards the ocean
1
2

As companies strive to operate in a more responsible manner, sustainability practices along supply chains have become a business imperative. 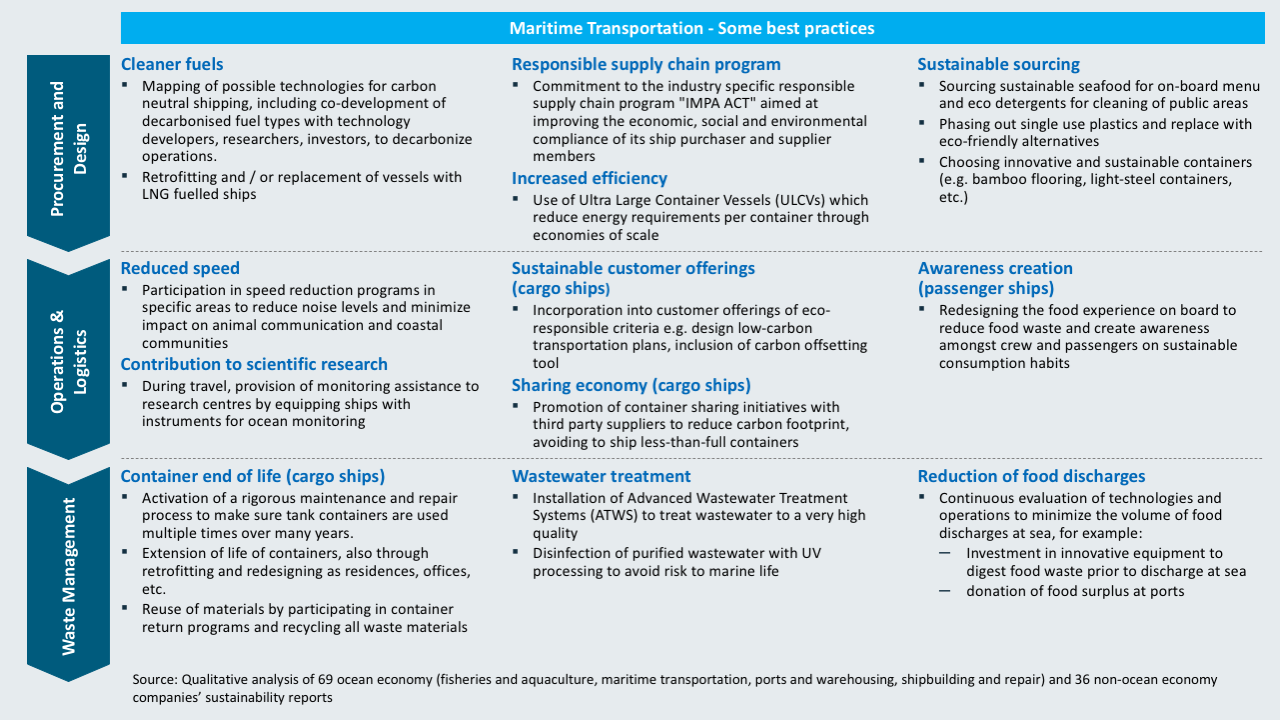 This report highlights several best practices in the field of procurement and design, operations and logistics, and waste management, aimed at providing evidence on how sustainable supply chain initiatives can trigger increased awareness and activation. 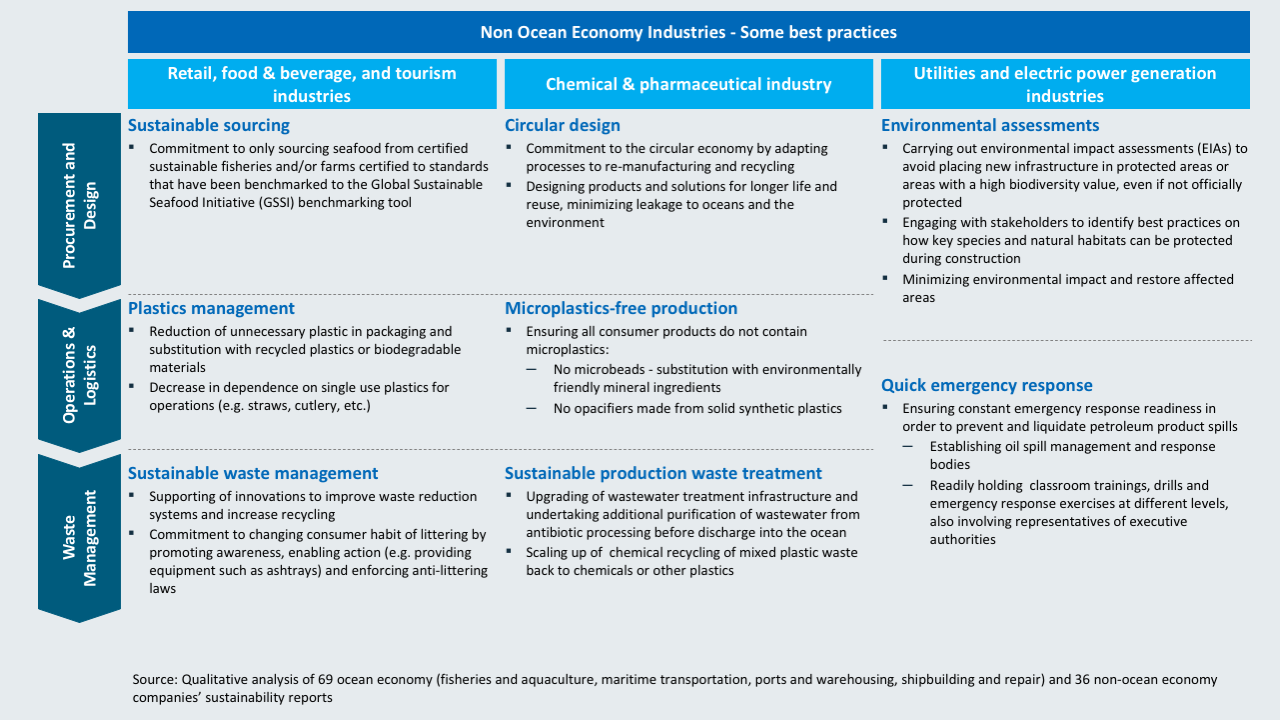 Finally, this study provides a detailed look at accountability and disclosure practices. Of the sustainability leaders, 91% report on their general sustainability agenda using the GRI, the most widespread sustainability reporting standard.In any case, as of today, there is no specific reporting initiative focused on ocean-related issues, and companies willing to report on the ocean are forced to elaborate and adopt self-defined targets or indicators.

Despite this lack of focus, a few of the companies most committed to ocean issues voluntarily set ocean-specific targets and indicators in order to report against them. 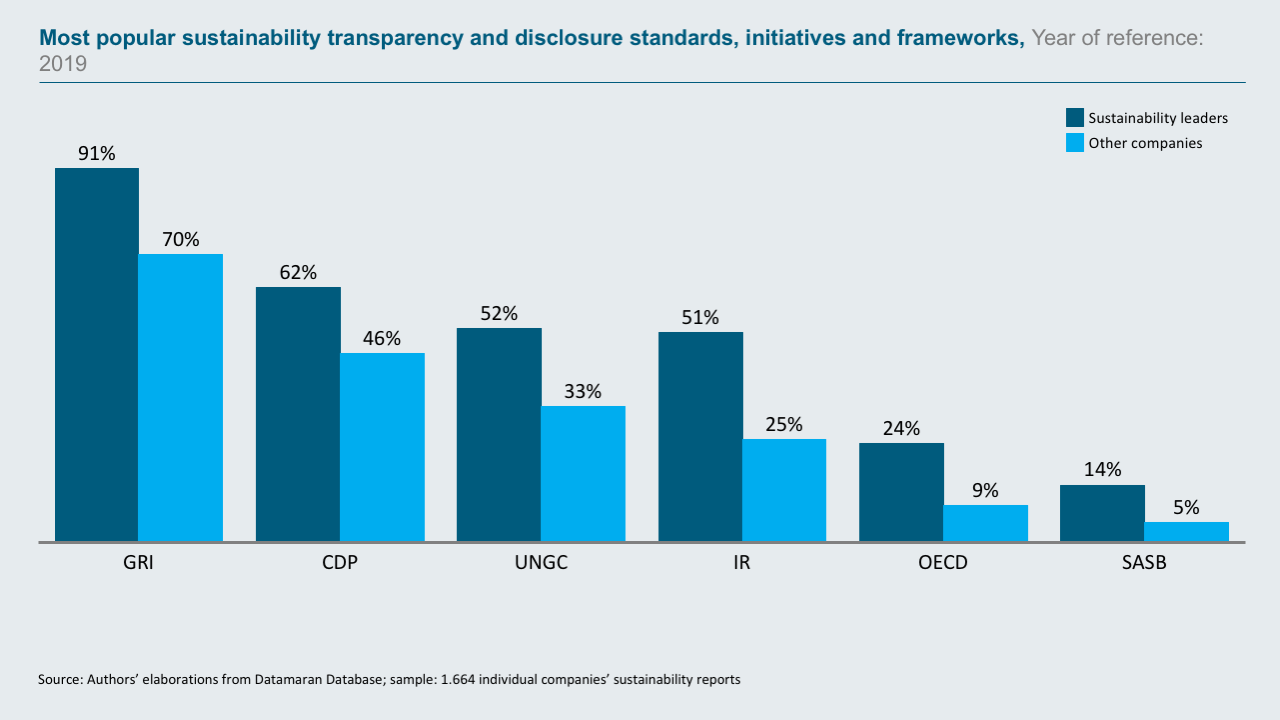 Some examples relate to operations in protected marine areas (e.g. the number of days of operation in marine reserves or sanctuaries), the prevention of spills and release of harmful substances into the marine environment, the support provided to scientific research (e.g. the number of days spent by vessels supporting scientific sampling for ocean biodiversity), or the adoption of responsible procurement in the fishing sector (e.g. the % of fish farmed or fished responsibly), as well as the implementation of sustainable and traceable feed techniques (e.g. the % of traceable feed in raw materials, or the carbon footprint of feed materials).

Additional targets or indicators relate to the reduction of single use plastics or the increased use of recycled plastic materials in products and packaging, the adoption of advanced waste and wastewater management techniques, or the support or sponsorship of marine biodiversity projects. 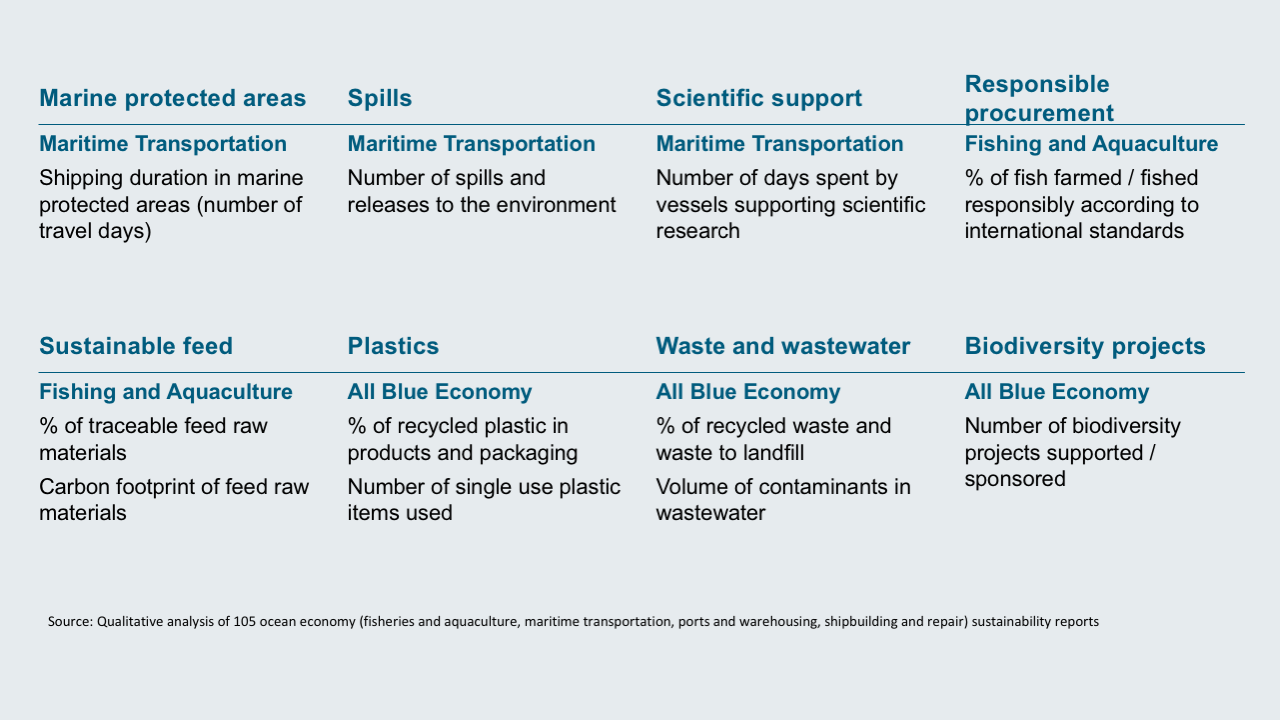 Source: Qualitative analysis of 105 ocean economy (fisheries and aquaculture, maritime transportation, ports and warehousing, shipbuilding and repair) sustainability reports
Next steps and beyond

The challenge of ocean sustainability has just begun, it is complex and intertwined with other great challenges (e.g. poverty, hunger, equality, health, climate change), as highlighted by the many different SDGs that remind us of the course to be followed.
The global perspective adopted by this second edition confirms the main findings of the previous study. Sustainability leaders exist; they are more aware and they have developed strategies, innovation and supply chain practices to mitigate their pressures on the ocean. However, the vast majority of companies are locked in, either because they are not aware of marine ecosystem problems, or because they are unable to respond through coherent and effective mitigation actions. 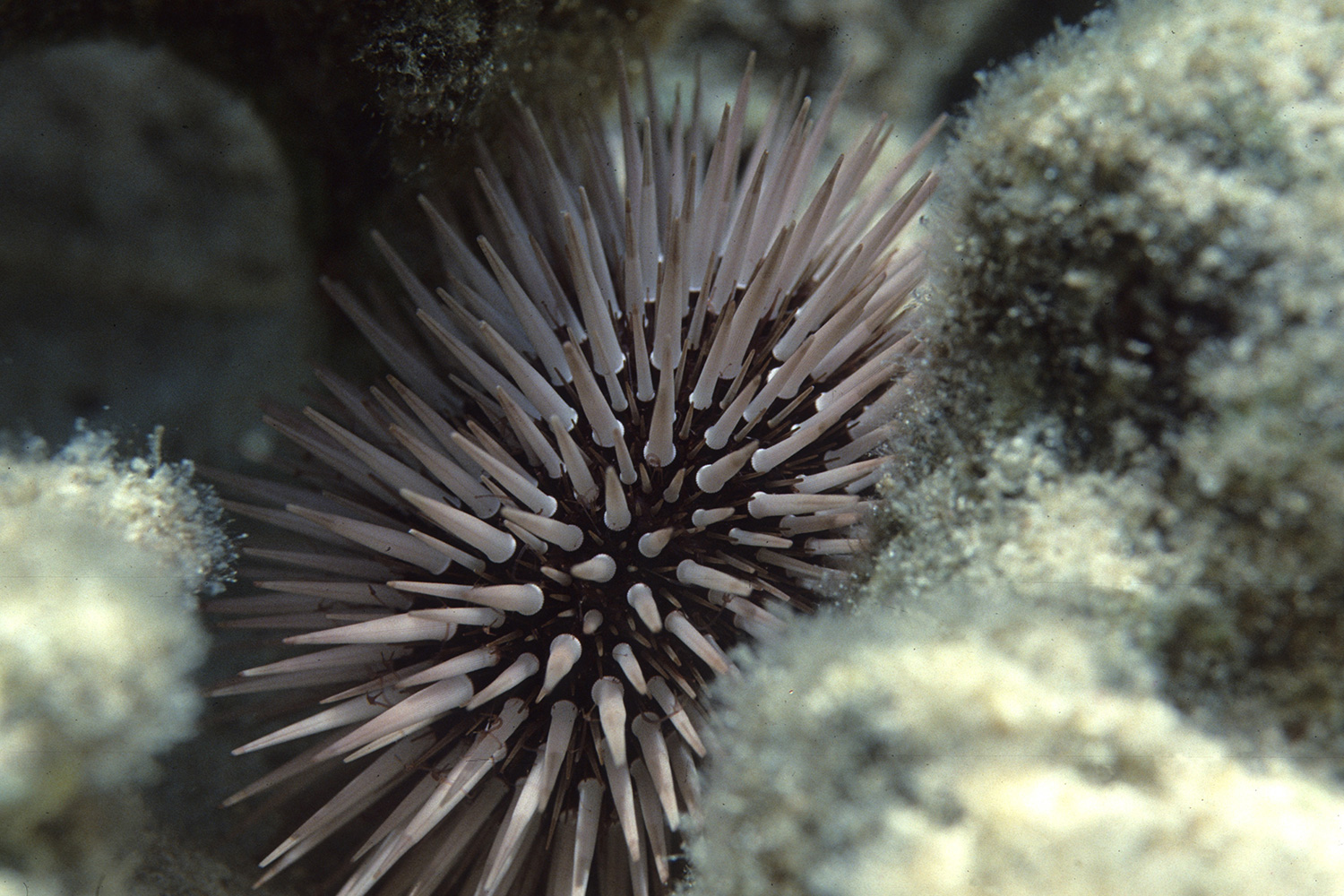 But we are running out of time.


We believe that greater awareness and activation can be boosted through new and dedicated initiatives aimed at promoting the disclosure of data and information regarding business pressures on marine and coastal ecosystems. Just as in the case of climate change and the circular economy, the disclosure of ocean-related standardized information will be beneficial to business, investors, policy makers and other stakeholders.

Do you want to know more about our projects?
contact us
newsletter
Related News:
13.4.22
CVC and OOF launch the M.A.R.E. project
A citizen science project that will collect marine data for 12 weeks across the Tyrrhenian Sea
Activities
Projects 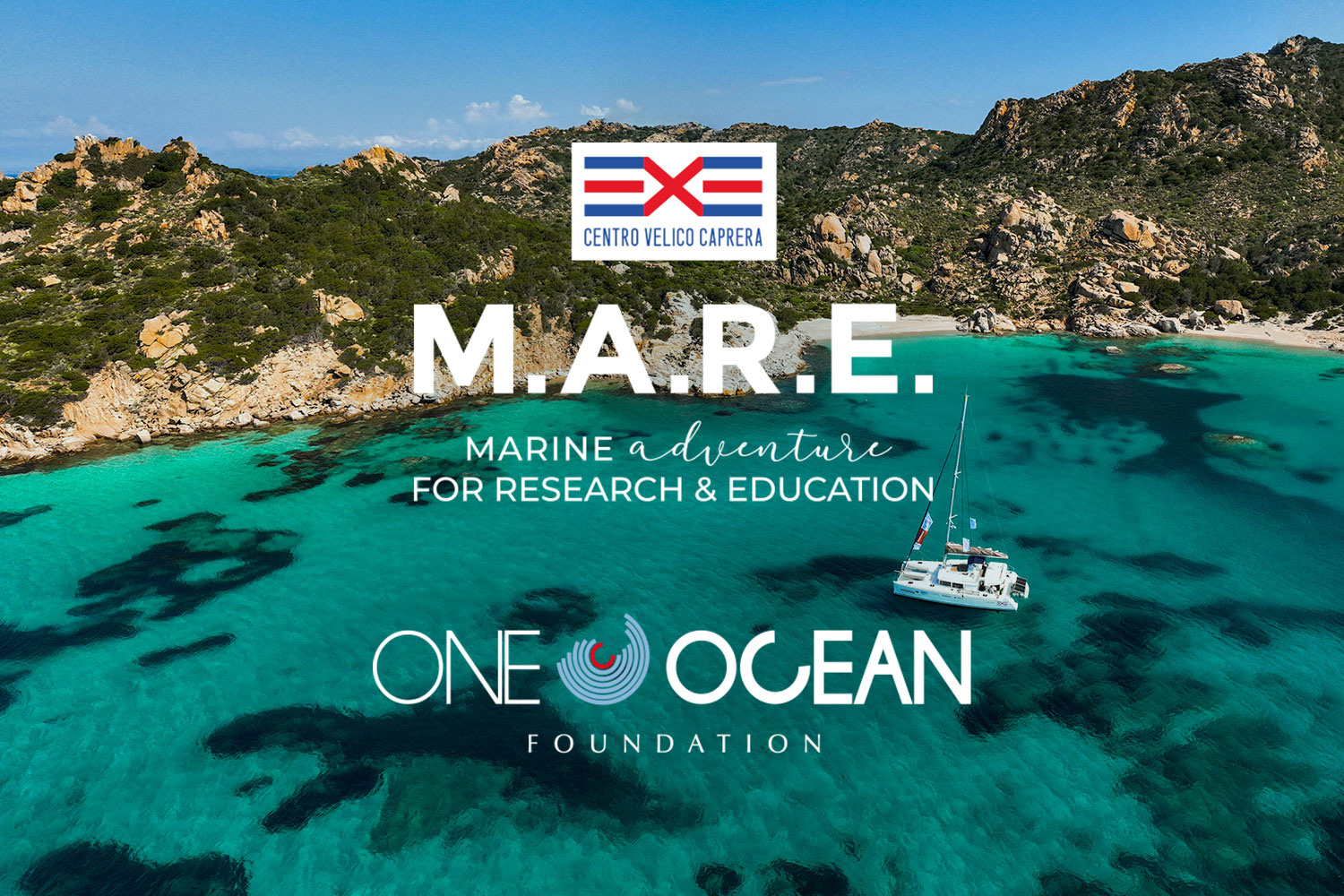 27.7.21
The new partnership with Aurora fellows for the Ocean Generation
A collaboration to involve 500 young people of the Sardinia region in the project Aurora
Partners
Projects 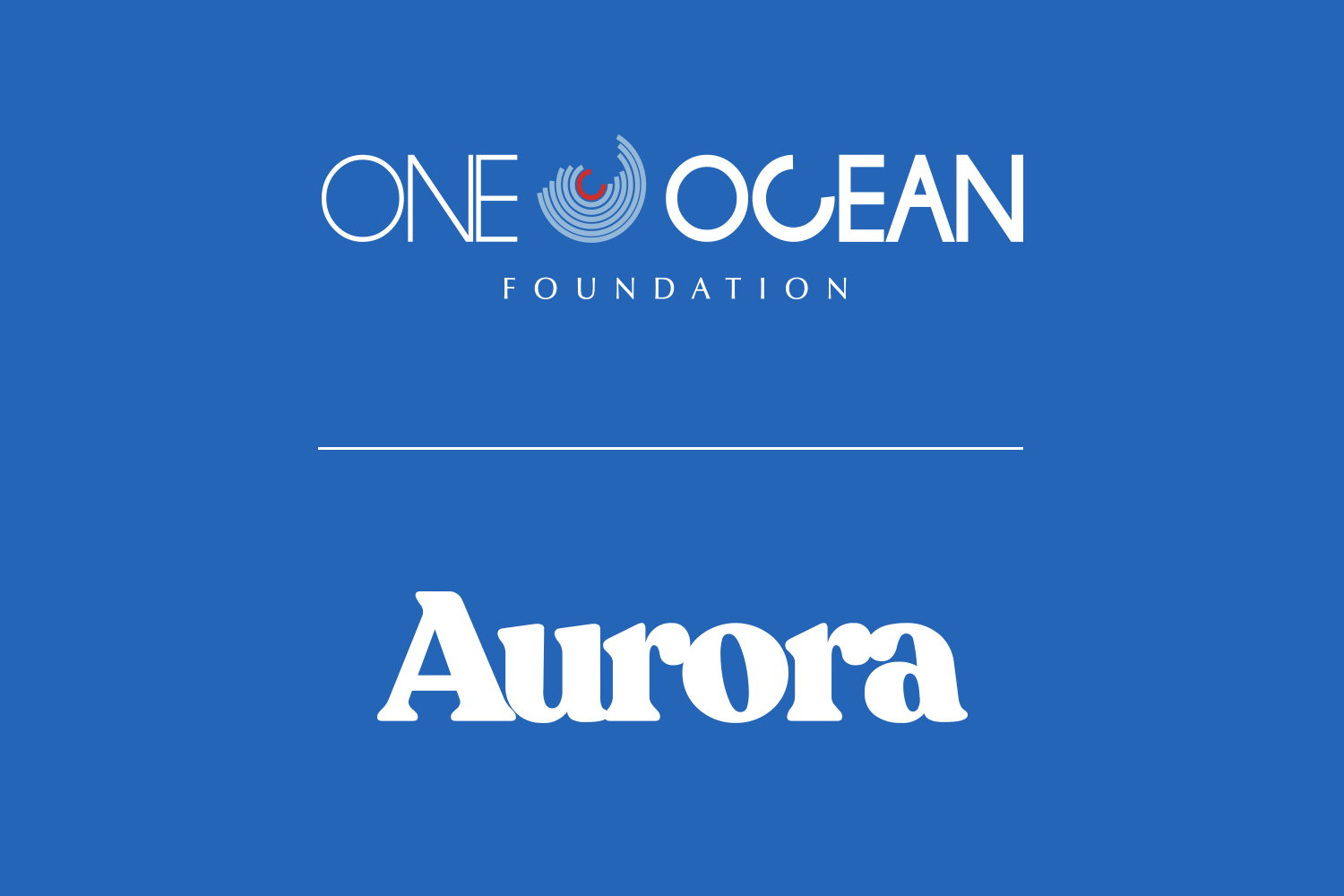 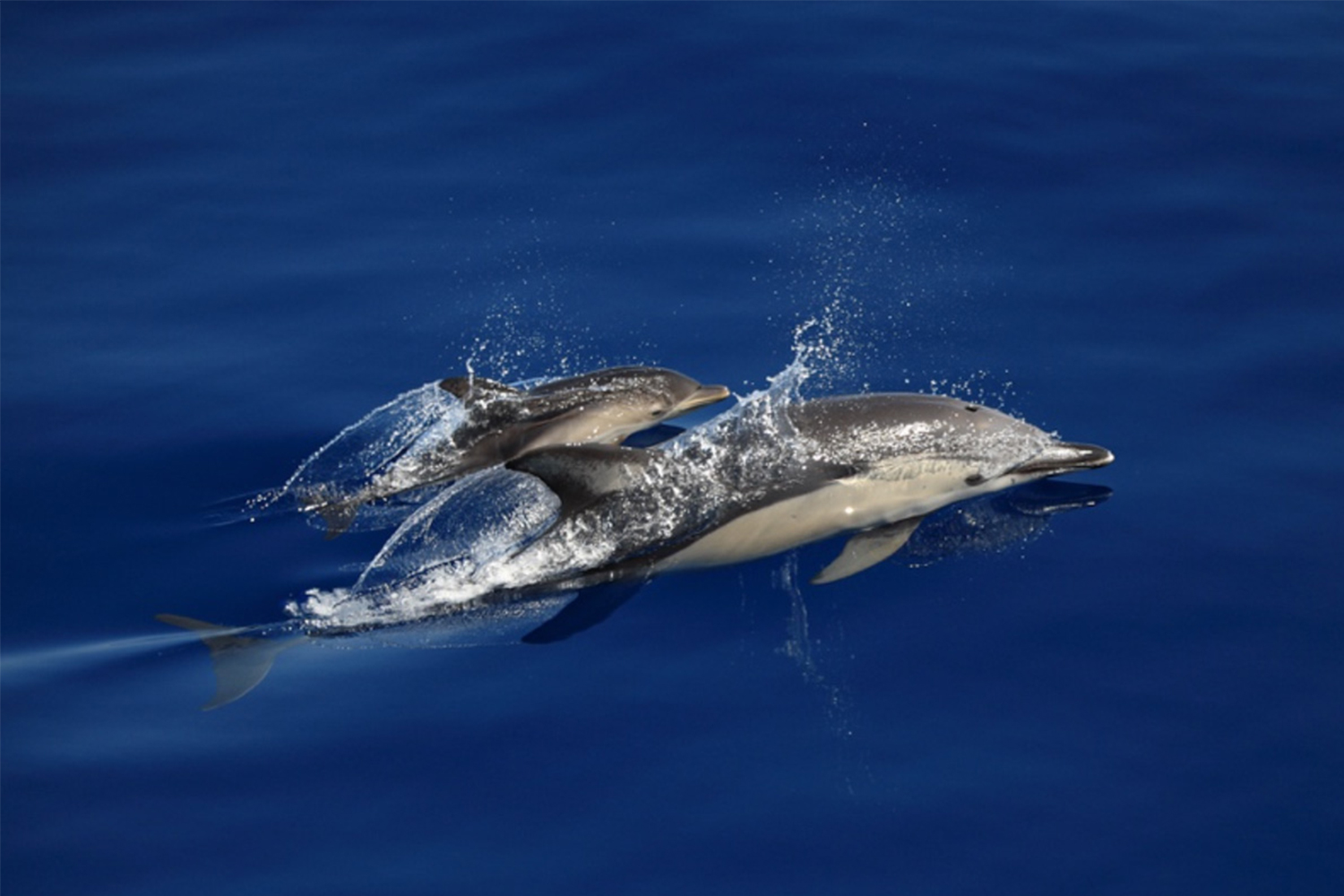 Do you want to download our reports and scientific publications?
View Resources